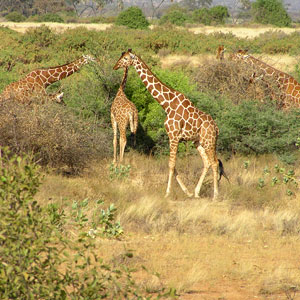 East Africa-a land of breathtaking scenery, majestic wildlife, and a distinct culture! Witness some of nature’s great treasures as you embark on this timeless Africa safari in Kenya and Tanzania. Along the way, your expert Driver/Guide will share insights about the wildlife, local cultures, and diverse eco-systems you encounter. And with a small group of no more than 6 guests per vehicle and 20 guests total you’ll experience a high level of service throughout your adventure! Start your safari in Samburu National Reserve, where you’ll have the chance to see rare animals not spotted in other parts of Kenya. Commonly referred to as the Samburu “Special 5,” they include the Grevy’s zebra, reticulated giraffe, Somali ostrich, Beisa oryx, and the gerenuk-a long-necked antelope that feeds while standing on its hind feet. Lion, cheetah, elephant, and Nile crocodile are also commonly spotted here. Explore the Serengeti ecosystem, one of Africa’s premier safari destinations, which includes the famed Maasai Mara National Reserve in Kenya and Serengeti National Park in Tanzania. This region is home to the annual wildebeest migration and has one of the world’s highest concentrations of large mammals. Keep an eye out for lion, Cape buffalo, cheetah, leopard, hyena, elephant, giraffe, rhino, and more on your many game drives. Beyond game viewing Globus has arranged unforgettable bush meals for you in both the Serengeti and Maasai Mara! A full-day game drive in Ngorongoro Crater offers you the best possibility of seeing the rare black rhinoceros, while your best chance to get close to giant elephants is in the swamps of Amboseli National Park. You’ll also enjoy game drives in Lake Manyara National Park and Lake Nakuru National Park. Other highlights include a visit to a chimp sanctuary established to provide long-term care for orphaned and abused chimpanzees-a special experience offered by Globus. Magnificent wildlife, important animal sanctuaries, and thrilling adventures-this exciting safari in Kenya and Tanzania has it all. It’s a once-in-a-lifetime opportunity not to be missed!

Prices are per person, land or cruise only, based on double occupancy. Offer subject to availability and change without notice. Some restrictions may apply. Please ask us for details.

Charges not included in the land vacation price: airfare to and from the start of your vacation; airline baggage fees including checked and/or excess baggage fees; Federal inspection fees for the Federal U.S. Customs and Immigrations; agricultural tax; other per person taxes imposed by government entities; applicable cruise taxes, fees, fares and port charges; passports; visas and vaccinations; transfers; tips to your Tour or Cruise Director, Local Host, driver, Local Guides, and/or ships’ crew; gratuities on ferries, trains, and cruise ships; laundry; telephone; minibar; alcohol, beverages, and food outside of the contracted menu as presented at a hotel or restaurant (these extra items will be billed to you before leaving the hotel, ship, or restaurant); additional excursions and activities not listed as ‘included’ in the itinerary; porterage at airports or train stations; Travel Protection premiums; and all other items of a personal nature.

Click on the buttons below to request a quote on this deal or contact us directly with further questions or comments.

Request A Quote Send To A Friend Have A Question? Contact Us

Please don't close or refresh the page while we are processing your submission
Please be patient, this could take a few minutes.